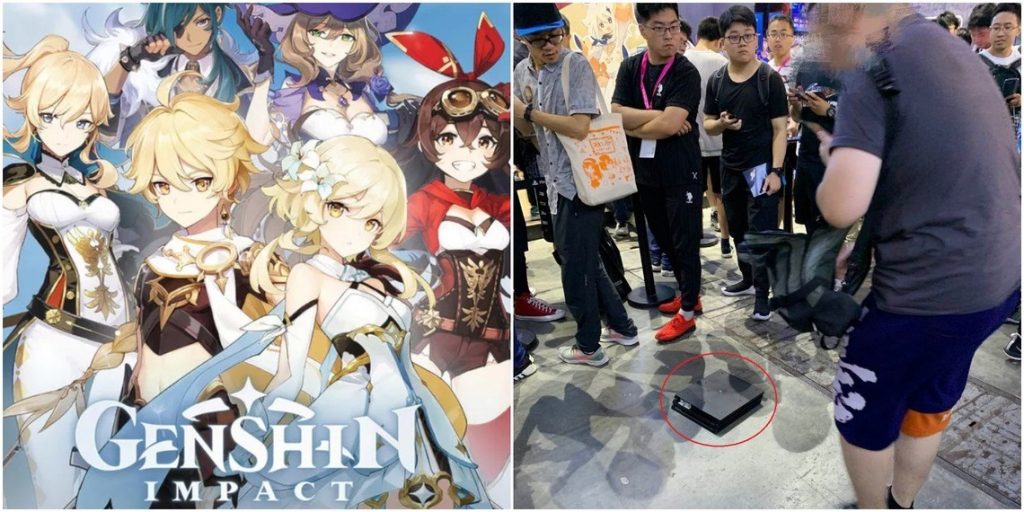 Today at the Chinese gaming expo ChinaJoy, a devoted fan destroyed a PlayStation 4 in protest at what a cluster of onlookers saw as Sony’s promotion of shameless The Legend of Zelda: Breath of the Wild ”clone” Genshin Impact.

When Mihoyo unveiled Genshin Impact for PS4, many noted the game was inspired by BOTW.

Some fans of BOTW are upset that Sony is promoting this game because of the similarities + they think it’s shameless of Sony.

This man smashed his PS4 at ChinaJoy in protest. pic.twitter.com/jwJqwREgaz

Genshin Impact’s announcement trailer released during E3 2019 last month sparked heated reactions that immediately identified it as a thinly-veiled copy of Breath of the Wild.

From the airy anime-inspired art style to the bright halo-like lighting effects by way of an uncannily similar cooking and dungeon mechanics, and even a towering castle dominating the horizon and map, it’s hard to argue that Breath of the Wild hasn’t inspired developer miHoYo.

See for yourself in the gameplay footage below.

During its press conference at ChinaJoy held in Shanghai on Thursday, Sony earmarked a segment to promote Genshin Impact’s arrival on PlayStation 4. The company is also involved in developing the port and is set to publish the title on its platform.

One fan felt the Japanese publisher had taken matters too far, and to voice his discontent, opted to obliterate a $250 console in front of the crowds gathered at this year’s edition of ChinaJoy – an event widely considered as China’s answer to E3.

Other than the theatrics on show as the fan removed his PlayStation 4 from a backpack and smashed it on the ground, reactions from onlookers were priceless. These ranged from disbelief to amusement with one pink lanyard-sporting gentleman clearly unimpressed by the whole debacle.

Whether such an overt display will have the desired effect and ward Sony away from promoting the title is up in the air.

Reports suggest he isn’t alone as hundreds of enraged fans have left insult and threat-riddled comments on a post authored by Sony on Chinese social media platform Weibo announcing the PlayStation 4 version of Genshin Impact.

Cooler heads succinctly point out that although the similarities with Breath of the Wild are unmistakable, this isn’t necessarily a bad thing.

The Nintendo exclusive garnered rave reviews from both pundits and players alike. Many went so far as to count it among the best games ever made.

The game Genshin Impact developed by Mihoyo is completely copying The Legand of Zelda: Breath of the Wild. The company uses all the elements in Zelda to make their own game and selling it (currently in beta version). Please take a look at this, thanks. @Nintendo @NintendoAmerica pic.twitter.com/mKgamjIFla

If Genshin Impact even flirts with that level of game design and overall quality, gamers are the ones who stand to gain. Furthermore, Breath of the Wild isn’t without its faults. It’s argued that the prospect of a game that may improve upon these should please fans rather than evoke their ire.

Equally, a closer look at Genshin Impact reveals a game predominantly inspired by the rich heritage of manga and anime and, more importantly, a few significant differences to Breath of the Wild.

The combat appears more impactful and fast-paced while the cast of characters is a whimsical bunch rather than reminiscent of the stoic resolve of Breath of the Wild’s protagonist Link. With this in mind, the derogatory use of the term clone appears a tad too extreme and claims of plagiarism equally disproportionate.

As Oscar Wilde once said ”Imitation is the sincerest form of flattery that mediocrity can pay to greatness,” and Genshin Impact looks anything but mediocre at this point.